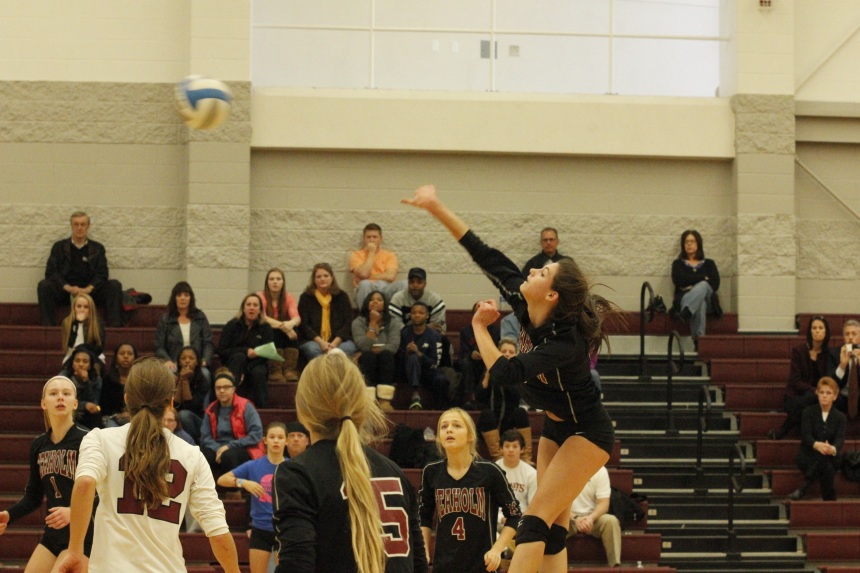 The victory came as a shock to many.  Clarkston had been ranked No. 1 in the state going into the match and the Maples made it look easy, beating the Wolves in 3 games and never allowing more than 18 points.

The seniors have been the core of the team all season, and they were critical in their victory.  Seniors Andrea Gothard, Erin Neuenfeldt, Claire Meads, Lisa White and Kathy Quigley were all key players.

Gothard had an impressive 28 digs.  Neuenfeldt had a double-double with 14 digs and 17 kills.  White and Quigley were dominant against the net.  Quigley had 7 kills and 3 blocks, while White had 8 kills and 1 block.

This postseason has been nothing short of a hot streak for the team, ending seasons left and right.

They began the post season beating West Bloomfield and Andover.  Their district championship came when they beat the then ranked No. 4 in the state Marian in a 5 game nail biter.

Districts in itself is an accomplishment, but they weren’t done yet.  Seaholm moved on to regionals taking down Troy in three games and then doing the same thing to Clarkston for the championship.

“Right now our team has this fire,” senior Erin Neuenfeldt said.  “We don’t want our season to be over and it shows in our performance thus far in districts.  Our huge district final victory over Marian has given us this momentum that has taken us all the way to states.”

After Seaholm’s regionals win, only eight teams remain in the postseason throughout the state of Michigan.  The next obstacle for the Maples is Macomb Dakota on Tuesday for the quarter state finals.  If the girls can manage another victory, they will be one of the top four teams in the state, and only one game away from the state championship.

One factor motivating the Maples is their enthusiastic student section, ‘The Maple Forest.’  Volleyball attendance has been at an all-time high and with a different theme every game, the students have been as supportive as they are rowdy.

“The ‘Maple Forest’ is part of the team,” said senior Claire Meads.  “I’ve never seen such dedication and the team is really appreciative towards them.  We love the Forest; they help us play our best.”

After games, the guys of the Forest put on a show for the audience, a dance to the popular song, “Gangnam Style.”

With a state title on the horizon, the Maples continue to work harder to keep their season alive.

Update: The Maples were defeated by Dakota on November 13th during the quarterfinals.