“Getaway” Encourages a Getaway From This Movie

Posted on October 30, 2013 by Kendall Hitch Leave a comment

This overly action-packed thriller, directed by Courtney Solomon (An American Haunting), manages to pack outrageously unrealistic scenarios and a predictable plot line all in one. 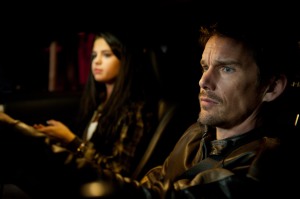 When well-known race car driver Brent Magna is forced into retirement after harsh criticism, he decides to move to Sofia, Bulgaria, his beloved wife birthplace to start anew.

However, Magna doesn’t exactly get the peace and quiet he was looking for.

The race starts when Magna comes home to find his apartment ransacked, blood on the floor, and his wife missing.

Suspense builds as Magna receives a call from a mysterious voice, assumed to be the man who has taken his wife. However, the intense mood is quickly forced in to a pit stop, when the voice that answers the phone is a laughable attempt at a devious Russian accent.

Manga must now follow exact instructions, with the looming threat that his wife will be murdered if he doesn’t comply.

The first task Magna is given doesn’t seem too obscure. Mystery man orders him to steal a Ford Shelby GT500 Super Snake, but when it’s wealthy teenage owner (Selena Gomez) comes along for the ride, things start to spin out of control.

As plot line races, the tasks given to Magna and subsequent series of last minute getaways feel more and more far-fetched.

Not to mention, the incompetence of the Sofia police department is outstanding, as countless attempts of the force to block one car in an extremely busy city are complete failures.

In several instances , Magna is forced to barrel through the middle of the crowded city, through masses of people, and construction sites.

At first the fact that Magna is willing to do anything to save his wife seems heartwarming. However, when hundreds of civilians and policemen are killed in the process, those warm and fuzzy feelings come to a grinding halt.

What’s amazing is Magna’s ability to barely avoid every police car in the city, what’s even more amazing is that the car, on full speed for ten plus hours straight, never seems to run out of gas.

One particularly amusing incident occurs when the rich kid with the iPad (Selena Gomez) is somehow able to hack into the city computer system and blow up the entire power plant. This lands the pair (Ethan Hawke and Selena Gomez) in another close call, but not too surprisingly they manage to miss the explosion and police by seconds.

The already questionable plot takes a turn for the worse when Manga and the moody teenager/world-class tech expert are able to deceive the master mind who orchestrated this whole plan by putting a decoy video on loop for five minutes.

It’s just a bit too lucky that this evil genius capable of hacking into government servers half-way across the globe is able to be duped by a trick best known for its use in Disney channel shows when teens fake sick and hack into their parents webcam so they can sneak out to a party.

As the checkered flag comes into sight, movie goers may be wishing theystayed off the track (or home from the theaters)

While the actions scenes looked awesome, a better question than how they looked is if there was a two minute span without one.

A more realistic plot line would have helped the movie out.

As the movie pulls into the finish line, one message is clear. Quality of the story line should never be sacrificed for enticing special effects.