Teens struggle to get a good night’s sleep

Posted on September 27, 2014 by McKenna Ross Leave a comment

Homework, sports, friends, clubs, family obligations, stress. All of these things can keep students up at night- or at least keep them from getting to sleep early.

According to the National Sleep Foundation, teens need eight and a half hours to nine hours of sleep every night. But, according to a recent Highlander survey of 51 respondents, 61 percent get between four and six hours of sleep on an average school night.

Though many students have trouble sleeping, few report having sleep disorders. Only 19 percent of respondents reported having insomnia or other sleeping problems.

According to Detroit Children’s Hospital Pediatric Sleep Lab’s Clinical Manager Joe Kierzkowski, five to ten percent of children 18 years old and under have sleep disorders, and fewer have chronic insomnia.

“The thing is, it only occurs after I get drowsy,” he said. “So I’ll get drowsy and then once I wake myself back up again, I can’t get back to sleep because my legs feel all shaky.”

Peterson has contacted his doctor about it and was advised to take medication for the disorder, but decided against it. He often feels frustrated when his RLS acts up.

“I feel like the whole rest of my night is kinda screwed at that point, because there’s no way I’m gonna fall asleep at a regular hour, so then I end up staying up,” he said. 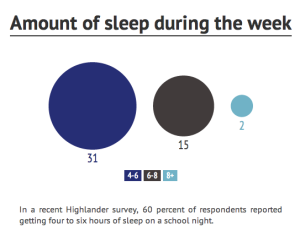 Junior Jack Lawson also has trouble with sleep, though he has not been diagnosed.

“Last night, it was 3 in the morning and I still hadn’t fallen asleep yet,” he said. “I was just looking for something to get me to sleep so I decided to reorganize all the clothes that I own. So I emptied out my entire closet and both my dressers and I reorganized everything. Then I went to sleep and I actually fell asleep pretty well.”

According to Lawson, incidents like this occur regularly for him.

Sixty-two percent of respondents said they get more than eight hours of sleep on weekends, significantly more than they get on week nights. According to Kierzkowski, this common habit is unhealthy.

“If you sleep too little during the week, when the weekend comes you have what they call ‘sleep debt’ where your body says ‘oh my gosh I was short on 10 hours of sleep during the week,’ well it’s gonna try to get that extra sleep on the weekend,” he said.

Kierzkowski said this cycle can mess up a person’s internal body clock, making it virtually impossible to catch up on sleep.

“Basically the human body is set up on a 24-hour schedule,” Kierzkowski said. “You’re supposed to wake up when it’s light and go to bed when it’s dark out. You follow a certain kind of 24-hour clock. You should go to bed at the same time everyday. And if you progressively go to bed later and later, you push your clock forward. So the later you go to bed consistently, the harder it is to fall asleep until later.”

He said teens most commonly have Sleep Phase Syndrome, a condition where circadian rhythm is off.

He notes teens have a bad “sleep hygiene,” the habits and environment a person falls asleep in, making it difficult to go to sleep early.

“Not having a good environment to get sleep is the biggest issue we see,” he said.

According to the National Sleep Foundation, having sleep difficulties can cause changes in behavior, memory, and body including increased aggression, difficulties remembering information and concentrating, and increased acne. Getting more rest can result in a better attitude and focus. 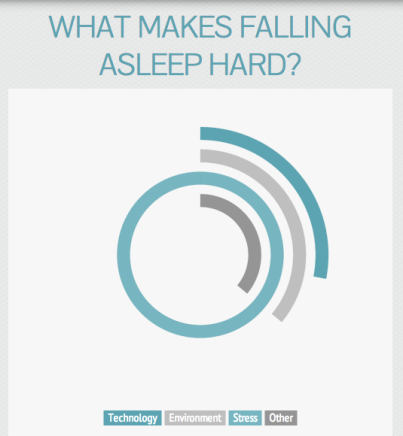 Kierzkowski advises teens to get to sleep and wake up at the same time seven days a week.

“Try to get into a nice, stable routine,” he said.

Related: Can’t sleep? There’s an app for that